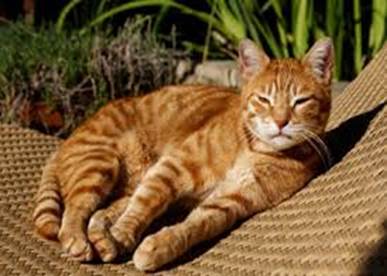 Two years ago I was looking out my window and saw the second coming of Christ. It only lasted fifteen seconds, but was impressive. It came in the form of an action undertaken by

my next door neighbor, a fifteen year old teenager named Matthew. Matthew has no readily identifiable religious affiliation. He does not attend church, pray before meals, or read the Bible. If Matthew has a religion it is rock and roll. He once told me music is the closest thing he knows to God; I understood him perfectly. It is one of the closest things I know to God, too.

Something I admire about Matthew is his belief in kindness. Looking outside I saw a very old orange cat crossing the street in front of Matthew’s house. The cat was limping slowly as a car full of teenagers was coming very fast. They would have hit the cat if Matthew hadn’t stepped in front of them, put out his hand signaling stop, and picked up the cat, taking her across the street petting her along the way. I know this cat very well because she belongs to my family. Matthew was my cat’s savior.

Saving a cat is typical of Matthew. He is very tender hearted, loves animals, and does not want to see anything harmed. His act of gentleness exemplifies second comings. Second comings occur whenever human hearts swell with the Spirit of Christ, leading to spontaneous acts of kindness. Some Christians say the only salvation worth having is a happy afterlife provided by Jesus. Maybe so, but it seems to me we can be saved from greed, hatred, and confusion, and for wise and compassionate living, even if there is no life after death. Buddhists tell us there are 84,000 gates to the dharma. Surely one of these gates is kindness. Perhaps this is what it means to be saved by Jesus. It is being saved by the Spirit of Christ, however named. This would truly be good news.

Matthew’s act of kindness missed the evening news. The news that day concerned violent deaths in Pakistan. That night when I laid down I had two images in my imagination: one of blood and tears coming from the face of a Pakistani woman and one of Matthew saving the cat. How should I prioritize them? I knew the one coming from the television was more tragic, involving so much suffering and so many human lives, including dead children. I am sad we live in a world where people undergo horrible and untimely deaths leaving others to mourn the rest of their lives. Matthew saving the cat seemed to pale in significance by comparison. “So much for Second Comings,” I pondered.

Then I remembered every life lost and every one left to mourn was like Matthew. They lived day by day, hour by hour, moment by moment. I sometimes forget this. When I learn about people suffering terrible deaths I am tempted to think they are defined by those tragedies, as if they are reducible to the worst thing ever happening to them. Then it occurred to me, these people, too had moments when they enjoyed the poetry of everyday life. They, too had their songs and stories. The nineteenth century poet Matthew Arnold speaks to this reality when he asks:

Is it so small a thing, to have enjoyed the sun, to have lived light in the spring, to have loved, to have thought, to have done, to have advanced true friends?

These small things – the sunshine, the springtime, the process of thinking, the small accomplishments, and the friendships – are the sacraments of daily life. And so is music.

Someone needs to invent a religion called The Religion of Small Things. This religion will not focus on questions of life after death or ultimate salvation.  It will not claim to have all the truth or privileged access to something called ultimate reality. Instead it will focus on satisfying relations in this world and be committed to the flourishing of all life. Its sacred texts will include poems, songs and stories speaking to life’s beauty and honestly about life’s pain.  Its touches of transcendence will be found in music, other people, and orange cats. Its spirituality will arise, not from an astral plane beyond our world, but in the depths of life itself.

It may or may not include belief in God; it will indeed have a sense of God. This sense is connected with what Rabindranath Tagore calls the stream of life – the one that “runs through my veins night and day runs through the world and dances in rhythmic measures….It is the same life that shoots in joy through the dust of the earth into numberless blades of grass and breaks into tumultuous waves of leaves and flowers.” This stream is the uncontrolling love of God as a living presence in the world. It is God’s Breathing.

Truthfully this religion, though unnamed, already exists in the hearts of millions on our small planet. When we take surveys of religious affiliation, the Religion of Small Things is not included. The closest we have is “None,” forcing people to define themselves negatively in terms of what they are not. Members of the Religion of Small Things are for many very important things: justice, goodness, hills and rivers, friendships, service, love and music. They are the Matthews of our world. There are billions everywhere, and more than a few affiliated with the big religions, too. They are Jews, Christians, Muslims, Buddhists, Hindus, and more. Their real religion, the one they live by, is closer to everyday life than anything prescribed. The Religion of Small Things can be included within the Big Religions and it can also exist apart from them. Second comings happen all the time, within and outside formal religion, if only we have eyes to see.

Jay McDaniel is a Professor of Religion at Hendrix College in Conway, Arkansas.

One thought on “Second Comings: The Religion of Small Things”

Natural Evil and Why Our Hope is Secure

Death to Power-Good News for a Power Hungry World